A Magic Road in the Comeragh Mountains

If I told you there was a section of road in Ireland where, if you park at the bottom of a small hill and release the brake, you will roll back up the hill, would you believe me? Well, when I first heard of such a thing I didn’t believe it either. This one was up north of Dundalk, and upon further investigation I found it to be true. So when I heard there was one down south, I just had to see it. 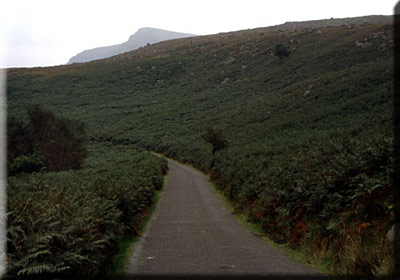 I was passing through Clonmel in Country Tipperary. It was already quite late so I decided to spend the night at a campsite I’d heard of. Clonmel is an attractive place, and is the county’s largest and liveliest town. Straddling the River Suir the town actually sits half in County Waterford. This is a common occurrence in this part of Ireland as many of the borders between the counties are set upon rivers, and many towns are founded upon these rivers. The town of Waterford is a prime example of this. Set upon the estuary of the Suir, half of Waterford actually lies in County Kilkenny.

The campsite was situated on the edge of the Comeragh Mountains, not as rugged as the mountains of Kerry and West Cork but stunning all the same. It was while drinking in the campsite’s bar that I learnt of the Magic Road in this area. I didn’t have time to go there this time, but the couple from the tent next to me did and kindly emailed me the directions.

A few weeks later I left Wexford, drove back to Clonmel and set out from there. I followed the road through Rathgormuck until I reached a crossroads. From here I followed the signs to the right for Mahon falls and the Comeragh Drive until reaching a little place called Mahon Bridge. At P. Powers and Son food store I turned right. It seemed that the name Powers was a common one here, as every store or business held the name. 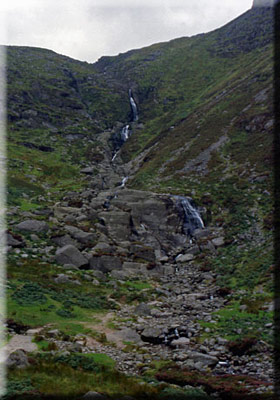 Behind me were two German backpackers I’d met at the hostel in Wexford. Upon learning what I was doing that day, they’d decided to follow me. I turned around and indicated to them that we were here. The driver took his foot off the brake and sure enough his car started rolling back up the hill. I did the same, and chuckled as I watched their faces light up like schoolchildren who had just seen an act of magic for the first time; the road up in Dundalk had elicited a similar reaction from me. You arrive with a sceptical mind and are just amazed by what you see.

The incline is obvious to the eye. No matter how hard you look, it always appears to be going uphill. Yet the truth is that you are going downhill. I even got out and walked up the stretch of road and it felt like I was walking downhill. I walked downhill, and it felt like I was walking uphill. So it was definitely an optical illusion, but an absolutely perfect one. Apparently it’s the funny angle of the entire hill that causes this effect.

I continued on to Mahon Falls. The road twisted through a landscape of green hills dotted with purple heather. The Comeragh Mountains – the easternmost extension of a mass of red sandstone created over 370 million years ago – formed a picturesque backdrop. Soon I came upon a car park. From here there is a path where you can walk to the bottom of the falls. Just a short way up the road from the car park, up a steep hill, is another small lay-by. I parked next to a couple who had spent the night here in their camper. From here you get a panoramic view of the surrounding landscape, and, as a family from Leeds had found out, it’s a great spot for a picnic.

The couple from the campsite had told me that from the start of Magic Hill it’s actually possible to roll all the way back to the shop, which is a good couple of miles. So I decided to test their theory.

I drove to the start of the hill, and then put the van in neutral, leaving the engine running so the brakes would work. Rolling up the hill when facing forward does have the same effect, but it isn’t as intense. At the top of the hill I did continue rolling for a while, and then slowed to a painfully slow pace. I was about to give up and put the van in gear when it began to slowly pick up speed again. Soon the pace quickened until I was coasting down a steep hill towards a t-junction. I had no choice but to apply the brakes here because I couldn’t see around the corner. Once I had determined there was nothing coming I released the brake and once again continued rolling down the giant hill for another mile or so, sweeping through the narrow country roads until finally parking up beside the shop at the bottom of the hill. So it could be done.

These roads are part of the Comeragh Drive, a well signposted drive that circumnavigates the Comeragh Mountains and goes through wooded sections of the Nire Valley. After chatting to the friendly couple in the shop I continued on, taking a short drive though the area. The sky was overcast, but I imagined that when the sun was out this part of Ireland would be bathed in an array of red sandstone, green hills and bright purple heather. I only wished I could have stayed longer, but as I always say: ‘It’s not going anywhere.’ 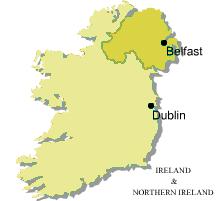