Gallipoli: Death and Destruction on the Dardanelles
by Keith Rhoades

In high school, nearly all of us take US History as a requirement to graduate. We often learn about The Battle Of Lexington and The crossing of the Delaware, The Battle of Gettysburg, the attack on Pearl Harbor, and of course D-Day and the bloodshed at the beaches of Normandy. Due to the United States late entry into World War I, we are often not educated on the bloodshed or important battles of this war 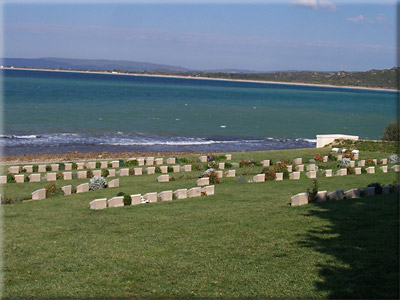 On a recent trip to Turkey, I started out in Istanbul. After several days visiting the “must see sites” of Hagia Sofia, The Blue Mosque, and Topkapi Palace, I headed to the Aegean Coast especially to see the Ruins of Ephesus. Being a budget backpacker, I take buses, and the ride to Ephesus is an excruciating eleven hours. Breaking the long journey up, I made a stop in Canakkale. Canakkale has two tourist sites in its backyard: Troy and the Gallipoli Peninsula. I did my obligatory tour of Troy. On the second day I decided to explore the Gallipoli Peninsula. I had seen the Australian made movie back in the 1980’s but never fully comprehended the importance and sorrow around this historical site and event.

The long slender body of water that separates Europe from Asia has seen thousands of years of history, has nurtured many well-known legends, and has been the home of ancient mythology. This is the Canakkale Bogazi - The Dardanelles Strait- lined within the bays and beaches of the Gallipoli Peninsula on the European side, and the Biga Peninsula on the Asian side. This is where one of the most deadly campaigns of the World War I took place in 1915, when the Turkish Army, led by the commander Mustafa Kemal (Ataturk) protected the straits from the allied powers of Britain and Russia.

Half a million soldiers are estimated to have lost their lives in the Gallipoli campaign, among which the ANZAC (Australian and New Zealand Army Corps) casualties were the highest. To honor those 500,000 soldiers who have lost their lives at Gallipoli, this peninsula is now a national park of remembrance. There are a number of memorials and museums along the peninsula, the most notable of which is the Canakkale Memorial, also known as The Victory Beach Memorial.

I spoke with a local historian who gave me information on the number of people who died from April 1915 until December 1915. It is estimated that 44,000 Allies were killed and 87,000 Ottomans died. I 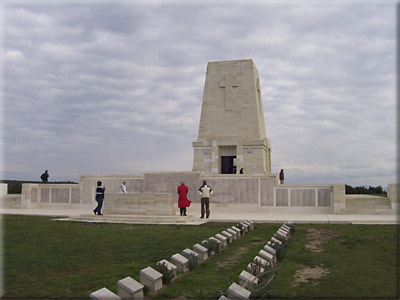 n addition, another 350,000 died from wounds, infection, disease and the elements. The historian explained how for eight months the troops lived with the smell of decaying flesh and infection, swarms of flies and insects, the harsh element and that after it was all said and done, the war raged on for another 4 years.

To honor the many thousands of soldiers who lost their lives on the Gallipoli Peninsula during World War I, the area is now a national park preserving the memory of that time in history. It includes memorials, monuments, cemeteries, and the natural beauty of the Ariburnu Cliffs and Salt Lake. Driving around the park today, the visitor is struck by the peaceful atmosphere of the pristine coastal forest, green hills, sandy beaches and blue water, in sharp contrast to the fierce battles which were once fought there. All visitors feel the special spirit of this place that played such a significant role in the birth of the Turkish nation.

The huge Turkish memorial at the tip of the peninsula can be seen immediately upon entering the Straits. The French and British memorials, along with other Turkish memorials and Seddulbahir Castle, are also nearby.   My first stop was the ANZAC Cove where one of the most moving memorials can be found: the Ariburnu Monument on which are inscribed the words of Ataturk, capturing the heart of this area. Every year on the 25th of April, ANZAC day is commemorated with ceremonies attended by visitors from all around the world.

I then trekked up toward the New Zealander Cemetery and The Australian Cemetery. I stopped at the trenches still standing only yards apart from each other, and made my way to the Muslim Cemetery. 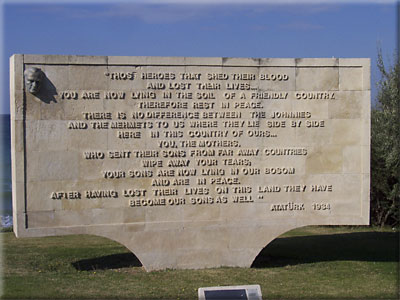 At each stop I was overcome with sadness. Each headstone I passed was inscribed with phrases such as “only son”, “beloved son”, “age 19”, “age 23”.

My last stop was the Kabatepe War Museum an equally sobering experience. The museum contained letters, diaries, weapons of warfare, uniforms and even a skull with the bullet still in it.  One of the docents at the museum informed me that they continue to this day to find shrapnel, bullets, and bone fragments in the fields of Gallipoli.

As I left the Gallipoli Peninsula to head back to Canakkale for the night I was haunted by what I had learned that day. I had become more educated on an experience that was outside the scope of US History and couldn’t help but think of those young men and boys who never lived past 25 years of age, who fought so bravely on both sides for love of country and love of their God. The countless white crosses that stood as moot witness to a whole generation that was butchered and damned. And in the end, I can help but reflect upon the words of Woodrow Wilson that this would be the War to End all Wars and the implementation of the League of Nations. And yet, all of the suffering, death, destruction, tears, and sorrow were for naught, as it all happened again…and again….and again.