Night - 3 o’clock. Road from the airport to the center of the city seemed to be long, although it was well lightened. A lot of segments of the road were digged and closed, and thus it was necessary to use less lightened narrow streets of Tbilisi. On our way we had to drive on several cobbled streets, what strengthened impression of the old city.

Georgia is seriously oriented towards integration to Europe. Declaration of politicians and other high officials from the TV screens and printed pages are the best proof to it. This intention is also supported by different organizations and institutions, which hurry to change their signboards that were written in Russian for hundreds of years, with similar ones in English. National Geographic and other foreign publications are sold in Tbilisi on the streets along with local newspapers. People speak about integration to Europe at the bus stations and in art galleries. 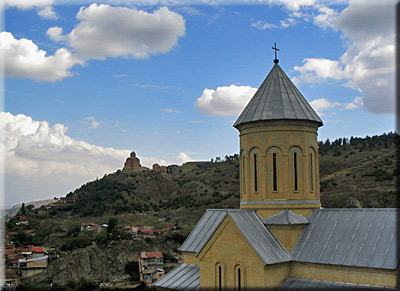 One can find an art gallery in Tbilisi at every 100 meters, where Georgian painters, photographs and other artists display their art. And as water satisfies physical thirst during a hot day, these art galleries satisfy thirst for beauty.

But not only galleries carry out this role. Old neighborhoods and buildings that are preserved in them by miracle also bring joy to eyes of the guests of the capital. One has impression that he walks along the huge cinema studio, where a film about Georgia of the last century is filmed, and all the things around are film scenery. Before arrival of the President of the USA George Bush in May 2005, center of Tbilisi got a “plastic surgery”: facades of the buildings were repaired, and bright make-up was applied, what allowed the central avenue of the city to have a fresh outlook, like after rain, which was not for a long time in Tbilisi. While the secondary streets continued to have downcast appearance. When you see cracks in the walls of the residential buildings and churches which appeared as a result of 1991 earthquake, it becomes clear that one more earthquake will be destructive for the “houses of cards”. It will be a big tragedy to loose these wonderful “scenery”, but even a bigger tragedy might be if the natural disaster will take human lives.

Burning sun can also be considered natural disaster. On Sunday the city remained for several hours without electrical energy, electrical wires being melted because of heat. But people in Georgia are more resistant, than metal. Even during the hottest day nobody in Tbilisi wears neither sunglass, nor hat as a protection from sun. A foreigner can be recognized immediately by wearing this stuff. Probably, Georgians love sun so much, that they consider it equal to sin to hide from it. Georgians sing hymns pf praise to the sun. The symbol of the sun is one of the symbols of Georgia and can be found on the walls of the ancient churches, on the tails of the modern airplanes, on the banknotes and other objects which are identified with Georgia. One has impression that Georgian men flirt with the sun by the means of the handkerchief. Just follow how many operations they do with handkerchiefs: they twist them, swing, roll up, whirl, wave, fold, crumple, wet and many other operations. Georgian men also attract attention by their greeting each other: clapping each other’s back, they kiss each other. Women do not express such a vivid delight meeting each other. 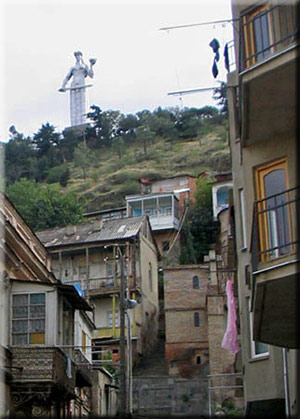 Georgian children, even small ones, are very expressive. Boys make gestures similar to those of grown-ups, using their hands in order to put accent on their words.

Georgia hurries to enter into Europe. This might be the reason, why Georgia began rapidly repairing its roads – the whole center of the city is dig and every day more and more meters of black asphalt make Georgia closer to Europe. Multiple flags with European symbols also prove that Tbilisi is almost a European capital. European symbols can be met in the city quite often – even on the flower bed in the center of the city, where the flag of Europe seem to be embroidered by blue and yellow flowers.

Georgia has a lot of monuments – and not only architectural. Sculptures of different famous historical people, artists, and scientists are waiting in the most unexpected places and positions. But the figure of woman – «Mother Georgia» – keeps eye on everything what happens in the city, standing high on the hill and being on duty both during day and night. She is friendly, and threatening in the same time: she keeps bowl in one hand and sword – in another.

Georgians adopted Christianity in the 4th century AD and since then they are tolerant for other religions. In Tbilisi one can find religious temples of Jews, Armenians, Catholics and Christians in the same neighborhood, at a distance of 100 meters. And what is important – they are functioning.

Georgia is a truly rich country. Its richness consists in extremely various landscapes, minerals, agricultural products and historical past. There are a lot of legends about richness of Georgia which are fed by the fact that the “Silk Road” went through Georgia. According to Greek legend, Argonauts went to Colhis (part of modern Georgia) to obtain the “The Golden Fleece”. Richness of Georgia can be seen with the armed eye – in the museums and with the naked eye - around. Antiquities are sold in Tbilisi at the open air market like fruits and vegetables. But the main treasuries of any country are people, and it does not matter if they are poor or rich - they are extremely valuable. And after getting to know Georgians better – you understand that Georgia is extremely rich country.

Old taxi, “Volga” drives us towards airport through the long city of Tbilisi, which is stretched along Kura river. Time in Georgia passed quickly. Taxi also goes quite quickly this time on the new roads, which are freshly repaired. Counter of the taxi shows kilometers and rubles, although Georgia uses for a long time its own currency - “Lari”. If Georgia will keep its orientation towards European integration, during our next visit to Georgia it will be necessary to pay taxi driver in euro.