Down the Rhone Valley

The long straight strip of tarmac tapered into the distant heat-haze. Best though to look at the next yard I had to walk rather than the next mile. My feet were now blistered in places and my leg muscles were complaining at the awkward stride. I should have broken in the new boots before this trip but there were many things I should or shouldn't have done.

It was mid June in the Rhone valley and although the temperature was well into the 90's I still wore my light jumper to afford some cushioning from my rucksack. My two companions and I had left Lyon two days earlier, heading for Marseilles and then onto the town of Napoule, spreading out along the route so as to give us a better chance of obtaining a lift.

About midday, I entered the town of Montelimar and stopped at a bar for a welcome glass of cool beer. As I sat there in the shade I decided it was futile to continue in this way and as I had been paralleling a rail track for many miles, I asked the waiter for directions to the railway station. The route to the station took me through a small public park and despite my aches and pains I still stopped to take in the beauty of the small lake and the flowers bathed in the sunlight filtering through the trees. 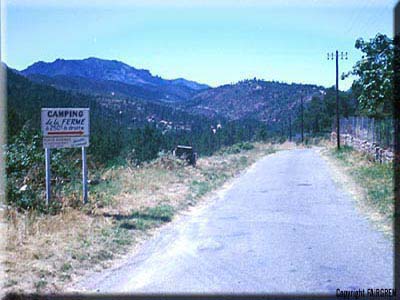 At the station, I purchased a ticket and waited for the train. I have very little recollection of the journey to Marseilles as I slept most of the way. On arrival I found that a connection to Napoule was not available until 7.00 a.m. next morning so I deposited my rucksack in left luggage and descended the hill into the city. After I'd had a meal, I would have liked to explore the city but my feet just weren't up to it. So I slowly made my way back up the hill to the station, which was now closed for the night, climbed into one of the large stone windowsills and went to sleep.

Next morning the train took me to St. Raphael where I had to catch a bus to Napoule. On arriving at the town I alighted from the bus and as it pulled away I stood there in the dust eddy at the side of the road thinking to myself, " I have arrived, but why have I come here, what am I supposed to do now? ".

The walking and the heat of the last few days had taken more out of me than I had realised and now although my body was in reality, my thoughts seemed as in a dream world. I started to mentally panic. I was standing at the side of the road in a strange town with very little knowledge of the local language and not knowing my purpose for being here.
Then I saw it. Across the other side of the road was a sign and on the sign was a representation of a wig-wam. A camp site! That was it, it was all coming back now, "Camp de la Ferme", that was where we had arranged to meet. Following the arrow, with a slight spring returning to my walk, I set off down the lane and over the hill to the end of the road. 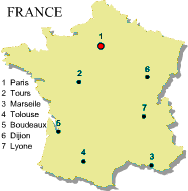