BLAM! We hit yet another rock. So much for harmony. We took a rest stop at the Track of the Tiger adventure base camp, and turned the canoe over. There were two large holes, which had been leaking water, in Reiner's end of the boat,

for hours.
"It's your fault." Said Reinier.
"If it's my fault, why are the holes in your end of the boat?" I asked, in defense.
"Are you guys going to be able to get along all the way down the Mekong?" Asked Anouk.

Reinier and I had never worked together before. And, I had never been in a canoe before. But this trip was to be the warm up for a Don Quixote-esque attempt, which I wanted to make on the Mekong.
"We will if Antonio could keep his head out of the photos." Said Reinie. He had been complaining all day that our group photos would have been better if my head were cut off.
"I think we'll get along fine on the Mekong." I said. "It only takes like two or three days, right?"
Both Reinier and Anouk suggested I look at a map when we returned to Chiang Mai.
To plug the leaks, I used a trick I had picked up, while living with the Akha hill tribe. We set an empty water bottle on fire, and dripped the molten plastic into the holes. It held, surprisingly well, until we hit more rocks. Every thud on the bottom of the boat was one step further away from the Mekong.

Any time I am on a river in Thailand, I always think of the movie "Apocalypse Now," where Martin Sheen, playing Captain Willard, is drifting up the Mekong river, into Laos.
"Never get out of the boat." Said Willard. "Damned right! Kurtz got out of the boat. And he split from the whole program."
Willard was on a mission to meet Colonel Kurtz. Although we still had two days to go, my mission would end once we reached the Lahu village, and I did an interview with the head man. I was extremely nervous about this meeting. Meeting a head man was like meeting royalty. I had never met royalty. I had no idea of how to comport myself.

Willard had put it this way. "Part of me was afraid of what I would find, and what I would do when I got there. I knew. But the thing I felt the most, much stronger than fear, was the desire to confront him."

Every time I stayed with the hill tribe people, I learned something new. The Akha had taught me to make rope, by splitting bamboo into long thin strips, and then braiding it. They also taught me to make a flashlight, using only two batteries, some notebook paper, a small piece of wire, and a light bulb. At our next stop, a Lahu man showed us an even better way of repairing the canoe. He ignited a car tire, and dripped huge clumps of liquid rubber into the holes. This really put my melted bottle trick into perspective. Now, the repairs were permanent. 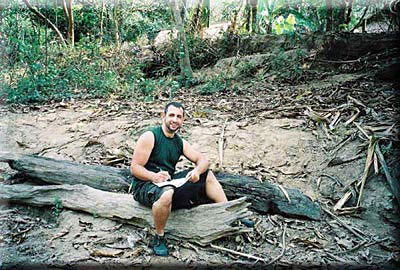 who runs Track of the Tiger, had built these canoes, based on a design used by Indians of Canada. They had an extremely shallow draft, which was especially important during the dry season. In the last five months, it had only rained a handful of times in Northern Thailand. The canoes were roomy enough to carry our luggage and water, with space for additional passengers. Even with their large size, the canoes were surprisingly agile. Everywhere we went, hill tribe people studied every detail. Like some strange form of reverse assimilation, the Hill Tribes of Thailand were being exposed to the culture of the Native People of North America. In my work, I often have the feeling that travelers are like bees, carrying a distant pollen to new and remote species of flowers, cross-pollinating the Earth. When I bring the story of the Lahu back to Brooklyn, the circle will be complete.

"Do you really think we could do the whole Mekong?" Asked Reinier. Since my boatmanship wasn't impressing anyone, I had been using psychology on Reinier, all day, to win him over to the idea of making the trip with me, and hopefully getting Shane to pay for it. Once I told him that there were over seventy-three ethnic groups on the river, or more accurately, seventy-three types of women, Reinier was hooked. He also liked the idea of being the main character in an historic adventure book. But I think the girls were the real attraction for him.
"I think we can do it." I said. "What about your horrible driving?" He asked. "We will just have to bring more tires." I answered. The Lahu had already taught me something.

At a small collection of houses on stilts, we beached the canoes. Pouk lead us on an easy hiking trail, into the jungle. The view from the boat was incredible, because of all of the air and space. But trekking, the jungle was up-close and personal. Now, we could not only see, but also hear, feel, and smell the natural world. Already, at this low altitude, we saw evidence of scientific farming, as we crossed over patty fields, integrated with the jungle scenery. Fruits and wild flowers grew inches from our path.

When we reached Tisae Lahu Village, we were told that the headman was out, working on the farm. So, we would have to wait. A Lahu woman took us to her house, which doubled as the village store. "We are sleeping in Seven Eleven." Joked Pouk, taking in the shelves of snack foods and cola, which decorated our sleeping room.
Just judging from the quantity of food available for sale, and by the nearly normal amount of baby fat on the faces of the Lahu children, playing in the yard, I determined that this village was infinitely richer than the Akha Hill tribe villages, where I had been living. In those villages, people had gaunt, tight faces, and children often lost their hair. Here, everyone looked healthy.

We grounded our packs, and had just settled into a very comfortable resting position, when Reinier said to me. "You're a journalist. Go out and learn something about the village, so you can write your article."
The bamboo mats which the Lahu had laid out on the floor for us were exceedingly comfortable, and standing up was not on my personal agenda. "Can't I just make something up, or do research on the internet, when we get back?" I asked, like a six year old who didn't want to get up for school. Luckily, Pouk, who, like a deadly Mary Popins, always had the right solution in his bag of tricks, boiled up some coffee for me. Fortified with caffeine, I was back in the game.
Our Lahu host, showed us a tremendous lizard that would be our dinner. Pouk assured her, however, that we had brought our own food. So, the large reptile would be spared for one more day.

Outside, what was typical about this hill tribe village, was that people lived in bamboo and wooden houses. There were large troupes of giggling children running

around, playing. And, there were packs of dogs, chasing the countless pigs. What was not typical, however, was that the village had its own school. There was a single classroom, made of cinderblock, where we found a volunteer Thai teacher. She was a wonderful young lady, who seemed very excited to meet foreigners. She explained to us that she teaches classes in Thai, English, and Chinese, for the children, in the day time, and teaches Thai to the parents at night. The classroom, although financially poor, showed the dedication and love that this courageous woman took in her work. To the extent that she was capable, she had decorated the classroom with posters, and children's art work.

While Anauk stroked a baby piglet, only a week old, we looked at the drawings exhibited on the walls. Interesting was that all of the children had drawn pictures of a house, with trees, and a sun, as children would have anywhere else. But these pictures were unique, because the houses were all bamboo huts. Most of the drawings also showed a TV in each hut. The trees and animals were all exotic flora and fauna, which western children only see on TV, but which make up the every day world of the Lahu children. Outside each house, there was a Thai flag, demonstrating once again, that the Thais have a strong sense of nationalism.