Kano, a huge African city, has been ruled by an Emir for hundreds of years. It sprawls out towards the desert with houses built mainly of mud and galvanised sheeting. The Emir's palace, centuries old and made of baked mud, with whitewashed features, stands spectacularly in the centre of the city. 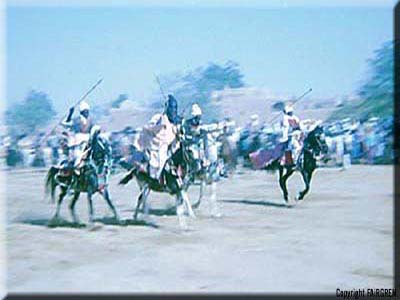 It is the day of a major festival when I arrive, the Eid, I think, the greatest celebration of the Muslim Year, when the month of daylight fasting, Ramadan, has ended. I am dragged into the festivities. A huge colourful crowd has gathered outside the palace. I am white and female, so stand out and am pushed to the front of the crowd. It is a huge parade ground backing up to the white-capped mud walls. Everyone is excited and seeks to explain what is happening. The Emir's noblemen and vassals are coming to salute him, pay their respects and acknowledge him as the leader.

Trumpets sound. A procession appears. Tall men in red robes lead, blowing ceremonial trumpets. Finally the Emir himself, riding sheltered under a blue and white umbrella, to be seen by the crowd. Dressed in flowing white robes with a white turban, glittering with jewels, he does not smile, but takes up position in front of the walls.

The crowd is off to the side of an open-ended square, with the Emir and his entourage at the centre of the closed end. The parade ground area is an expanse of compressed-mud.

One solitary horseman in multicoloured silk robes, holds a spear high. Silence falls and everyone is waiting, anticipating the display to come. There is suddenly a thunderous noise. We all look to the left. A cloud of dust appears and seems to charge towards us, and past. It is a squad of horsemen with spears set. They flash past at high speed, straight up to the Emir. Hearts are pounding - it's the only noise from the crowd, but the horsemen skid to a dramatic halt, just yards in front of the Emir, raise their spears and salute him.

When they stop you can see how magnificently they are dressed with silver and gold, daggers and swords, and embroidered accoutrements. They salute and move off to the side to form a guard of honour and more groups of horsemen charge. The Emir returns the salute, but keeps his cool!
I marvel at the splendour of it all and go off with my friends to enjoy the feast. The next day the streets of Kano run with blood - but only that of the goats slaughtered for the feast.