The trials of travel
by Jonas Persson

This journal entry about Madagascar has been difficult to write, as Madagascar as a country has been difficult to grasp, but one thing stands clear; Madagascar has been an enormous experience. Everything has two sides, they say, and I have never experienced it to be more true than in Madagascar. Obviously, seven weeks has not been even close to enough time for exploring the world’s fourth largest island, but, at times, it has felt like it has been more than enough. Let me tell you about the trails of my travels. 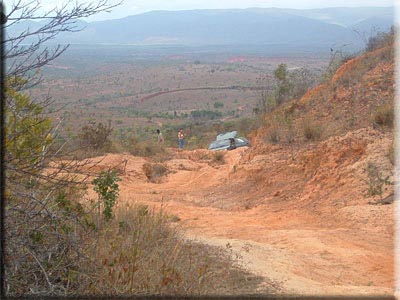 It didn’t take me long to realize that, being raised on food from the Persson kitchen, my stomach had not cultivated the proper bacteria herd needed to protect me from the food of Madagascar (granted my brother, Erik, once made a brave attempt to poison me with his fish sticks and spinach stew, but still). I guess I should have seen it coming when an item on the French menu read: “ass de poisson fumes”. I’ll spare you the details- trust me, you don’t want to know. I was scared at times, I confess, but my newfound friend, Imodium, and I, defied all dangers and engulfed the variety of Malagasy food. The Zebu yoghurt is delicious and together with mangos, bananas and coconut milk you have yourself a divine breakfast. In the streets you can buy sambos, manioc (some kind of tasty root), fried bananas and French pastries, and the seafood in costal cities like Tamatave, Tulear and Diego is absolutely fantastic. Best of all is the price however (I’m cost-effective, not cheap). How about a breakfast consisting of a fried banana, a potato burger, two cups of yoghurt (because it’s so good) and a cup of hot chocolate for a mere 40 cents? So what’s my advice on food here? Well, if you don’t dare it you will miss out- both on the pleasures and the pains.

But why do people, us included, really chose to come to Madagascar if not for the extraordinary nature and the sensational wildlife? Visiting six national parks, two wonderful beaches and traveling the countryside in taxi-brousses has been enriching. However, my illusion that the Madagascar wildlife was harmless, hence, Madagascar’s nature safe to wander, has been adjusted. In the national parks, I discovered that I was, in fact, a leach magnet, and the only reason I, contrary to Katie, got back to our hotel without any bloodsuckers still feeding on me, was that I, contrary to Katie, wasn’t paying as close attention to the rest of the sightings as I was to the leaches crawling on my sleeves and up my boots. 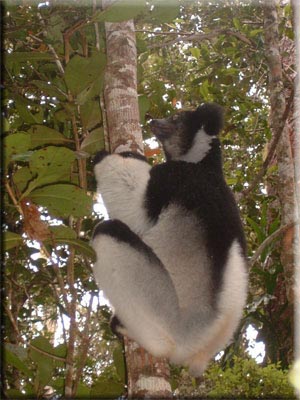 In addition to leaches, our three nights camping in a rented tent couldn’t have had a better start than me extracting the wrath of the only poisonous animal in all of Madagascar; the scorpion. Being stung by a scorpion was a childhood fear come true. Being raised in the non-venomous Swedish forests, I had read in comic books how the Phantom once got stung, and nearly died. I had seen enough Indiana Jones and the mummy movies to know that only the toughest will survive a scorpion. Therefore, I am proud to write, period! Well, let’s toy with the idea that a scorpion sting might not be lethal after all (to mortals that is). In such a scenario it would still not help having our ignorant tent neighbors, the Italians, tell us that I needed to get to a hospital- pronto! It was not until a more level-headed Malagasy man came to inspect the now dead scorpion (I find Katie’s instant reaction towards my attacker to be endearing), giving me some garlic to both eat and rub in the stung area, that I got hopeful, thinking I might see another sunrise.

As the animals decided to take a break from tormenting me, some slippery rocks stepped in to take over the job. In the heart of the national park of Isalo, inside a ravine at the bottom of a small waterfall, some slippery rocks chose to play a trick on me, and I fell. I dipped half of myself in the pool of water under the waterfall, scraped my right shin and forced Katie to quell her laughter- brought on by watching my tall legs point to the sky. Not until almost four hours later, as she dabbed my wounds with alcohol, did nurse-Katie let her laughter out, explaining the comical sight to me.

However, some minor scrapes aside, hiking the parks of Madagascar has been breathtaking. Waterfalls and ravines, natural swimming pools and wandering from a bat cave out into a sunken forest, back into another cave decorated with gorgeous, sparkling stalactites and stalagmites. From the animal kingdom, we’ve seen ambassadors of everything from the adorable Mouse Lemur to, my favorite, the mighty Indri (which can jump ten meters in a single leap). We’ve seen Fossa (a remarkable cat-like animal) and numerous chameleons, not to mention the different species of Uroplatus (a little lizard which camouflages itself as a leaf or a piece of bark). 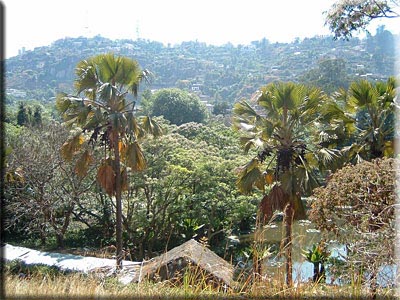 The two gorgeous beaches we visited, Ramena in the north and Ifaty in the southwest, reminded my fair skin that there’s a price to pay for soaking up the sun. One day in the sun equals three days of sunburns and an additional two days of peeling. But, truthfully, I am no rookie when it comes to sunburns and I managed rather well battling the sun. The beach in Ramena is my favorite. The sand and the water were perfect and even better was the absence of tourists, giving us a beach from paradise all to our selves. Ifaty offered coral reefs and snorkeling and we took a daytrip with a pirogue out to the reefs where we saw the sparkling underwater life of Madagascar. Included in the day tour was a delicious, and enormous, lunch of fresh-out-of-the-water grilled fish, rise and fruit.

Seeing the countryside from the inside of a taxi-brousse was at times sad. Sitting in an old woman’s lap with my legs crammed up to my chin and another fellow sitting on my feet, I saw smoke billow from the once-upon-a-time forests, and people throw trash out of the window whenever they needed to. It was disheartening to see a beautiful country going up in smoke. There is so much that has to be done, and before it is too late. Fortunately, there are many things that are being done to alleviate the problems of Madagascar as national parks are being created to save the flora and fauna from human impact, and we have met several dedicated people that provide hope for the future.

Now, with just a few days left in Madagascar, I am sad to leave, but also, in some sense, a bit relieved. I know that with time only my good memories from Madagascar will prevail, and the unpleasantness will fade to fondness.