A Trip to the Opera

We are going to the opera in Verona. It's exciting. Neither of us has ever been to the Opera before and we are staying near Verona just at the start of the Opera season. So we are going. We have booked an inclusive trip - coach to Verona, guide to the gate of the arena and back, as well as the tickets. We leave Malcesine at 5.30 p.m. and should be back at about 2.30 a.m.. It's the first night of this summer season, so should be quite a spectacle.

We're off - on the coach the tall blonde guide gave us all our instructions and our tickets - in English or German. Then we settled back to enjoy the hour and a half ride.

At Verona we followed our guide - who held a stick with a pink scarf tied to it up high - we have laughed at other groups doing this, but now we were doing the same. She took us right up to the square and made sure we all knew which gate we would use to enter the arena and where to assemble. We had two hours to wait before they were due to open the gates into the arena, and three hours before the performance was due to start.

We joined the queue which trailed across the square from our entry gate. The sun was shinning and it was warm. I was glad I had brought the water, Peter was glad to be able to put the rucksack down. It was very heavy with all the food and drink for our picnic. 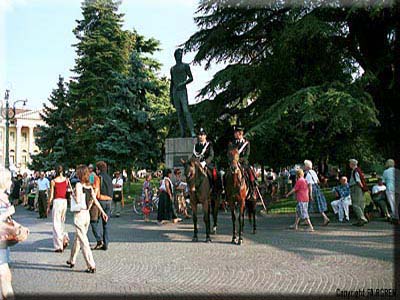 The queue was static, but there was plenty to watch around us as the throng moved around and the queues at the gates grew longer. Two mounted police, in full uniform including swords, watched and moved carefully through the crowds.

After some two hours becoming acquainted with people around us in the queue there was some movement in the arena - the cushion sellers were getting into position, and guards were taking up their places by the gates. We waited and waited until it was only half an hour before the performance was due to start. People were getting restless and shouting to be let in. There seemed to be some trouble unlocking the iron gates, but eventually the queue started to move. We were going in.

We were in the cheap bench seats, still the same as they were in Roman times. We had to go up steps, show our tickets, have our bags searched, wind up the stairs, past the cushion sellers and out into the arena.
What a sight, masses of people were pouring out of the openings like us and clambering up the tiers of benches.

We decided to head for the top and ended up on the very top tier of seats near one of the spotlights. From there we could watch the crowd entering on all sides and look outside to the activity on the square. We had plenty of space and coats and rucksacks for padding, so settled down to our picnic before the performance started. We made sure we had cameras and binoculars ready. It was approaching sunset so there were some good shots of the sky turning orange and pink with the ruined outline of the top of the arena defined against the sky. 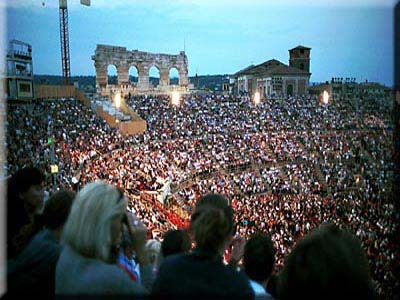 We used the binoculars to inspect the set opposite us which took up a quarter of the banked seating. The orchestra was in from of the set, getting into tune. The plebs in the banked sections had been let in first, so we could all watch as the important guests, or those who had paid a lot of money for their tickets, arrived. Since it was the first night of the season we really were privileged to view the display. Just as at the Roman entertainments, the populace had come to see the gladiators vie for position on the arena floor. The fashions were fantastic, and the models were worth looking at as well. You could not forget that Milan, one of the fashion capitals of the world, was only a few miles away. It was quite a show. They displayed their wares and showed off right up to the start time, just settling into their seats as the atmosphere changed.

A spotlight picked out a female figure in a black cloak carrying a gong. She beat the gong several times to mark the start. Silence fell. We were all ready to hear and watch the spectacle of Nabucco on the first night of the Verona Opera season. 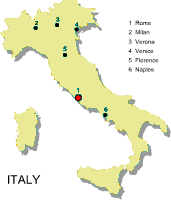