Having persuaded my employers to allow me to take a sabbatical in the early part of 2006, I spent about three months at the Panna Tiger Reserve in central India. I have recounted below one of the many special events that I shared with the family of travellers, naturalists, scientists, mahouts and forest guides in Panna. A community, if you will.

We had just finished eating our packed breakfast at one of the small number of assigned "breakfast spots" in Panna Tiger Reserve. It is a regular place to stop and is several hundred metres above sea level on the higher plateaux. As such it is an ideal location to observe the endangered vultures nesting along the sides of the cliff faces.

As the engines of five or six jeeps started up, we heard a monstrous growling noise from the gorge below. At first we were all stunned. Even our forest guides cocked their heads a little, saying nothing. Then it came again and this time louder - made all the more chilling because the sound reverberated against the surrounding walls of the gorge. Those who knew what it was ran to the edge of the cliff. The rest of us followed.

For a few moments I even overcame my extreme fear of heights to peer down from the edge of the cliff. What we saw was a fully grown tiger, slowly making its way across a rocky dry riverbed. One of the naturalists looking through his binoculars identified it as Broken Tooth, from a distinctive diamond shape marking on its body. This was one of the resident male tigers, about five years old. As his name suggests he is missing one of his canines although by all accounts this does not seem to have affected his hunting abilities.

Broken Tooth walked up to one edge of the now dry stream bed, and leapt up on to the highest rock he could find. He then sat there for an hour incessantly licking the front of his chest and occasionally changing position. The only time he looked alert was when he appeared to take notice of a small creature that appeared and then disappeared behind the rocks. I did not see it, but a fellow observer said it looked like a mongoose.

It eventually got too warm and Broken Tooth slowly rose and disappeared almost magically into the thickets which reflected shades of yellow and orange in the morning sun.

But what of the thunderous sounds we had heard ? Except for those sounds, there was very little evidence of what might have happened. We returned to the Ken River Lodge where we were staying and shared our exciting experience with the others. To spend about an hour observing this big cat, albeit from quite a height was fantastic.

During this time the naturalists from the lodge, the mahouts (elephant handlers) and forest guides had all become aware of a new tiger in the area. We even saw some pug marks of this cat. It was "new" because the pug marks seemed unfamiliar. What made it more challenging (or frustrating depending on your point of view) was that unlike some of the others, this tiger would not stay put. It was difficult to track and would apparently disappear into the hills almost every day.

On one occasion we came close, very close to it. Three elephants spent a considerable amount of time following it through dense forest, while we waited patiently and quietly in our jeeps. But it wasn't to be. The sounds of the elephants making their way through the vegetation grew fainter, and then eventually stopped. Our hopes faded. Our suspicions that we would not get a glimpse of this tiger were confirmed when the mahouts returned to the jeeps and asked us to try another day.

In the following days Broken Tooth was seen again. And those that saw him at closer quarters said that they saw wounds. He had clearly been injured. There were many possibilities. Had he been injured during a hunt ? Maybe he had surprised a sloth bear and had suffered the consequences. Perhaps he had been in a fight with another tiger. It was too early to speculate.

In the next few days more information came through from the jungle. 125*, an ageing male had been spotted. And he had an injury to one of his eyes so severe that he was unable to open it.

So now we had two large males, both being seen with new injuries at about the same time. But was this enough proof that they had been involved in a fight ? And having spent some years living in relative peace side by side, why the sudden aggression ?

The next day we heard more reports from the "community". This time it was good news, and particularly so given the recent history of tiger numbers declining in Panna and other Tiger Reserves in India.

A female tiger had been spotted, and she had cubs with her. They were probably about three to four months old. There were big smiles and cheers at the camp when the news spread.

It was of course the very same tiger that had been proving so elusive. It was obvious now why she kept returning to the hills. That's where her very young cubs were.

What was remarkable is that she was spotted at almost the exact spot where we had seen Broken Tooth a few days earlier- down in the gorge. She was clearly in Broken Tooth's territory, and he was almost certainly the father of her cubs. 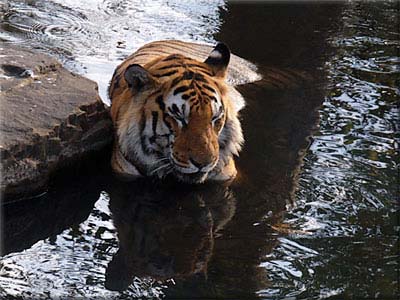 125 who was usually spotted in an adjoining territory had probably been trying to make a play for the female that was in Broken Tooth's territory. If successful he would have killed the cubs to ensure his bloodline continued rather than Broken Tooth's. But this never happened. Instead, Broken Tooth defended his territory and in doing so he shielded the female and the cubs as well.

And this is the fight we had heard, but not seen. By the time we got to peer down from the cliff overlooking the gorge, all we saw was Broken Tooth literally licking his wounds.

And remember the mongoose somebody saw ? Some now believe its unlikely a tiger would even raise an eyebrow on seeing a mongoose - we speculated that it was possibly a cub - his cub, that made him actually sit up and the female was probably very close by, perhaps right behind one of the rocks.

Broken Tooth has now become quite a well known tiger in the area. He is also the "new male" referred to in the 2003 BBC documentary Tigers of the Emerald Forest - which follows the battle for territory between two large males.

Perhaps in the future I'll be able to go back to Panna to follow the exploits of the next generation of these amazing animals.

* 125 was thus named after the frequency of the radio tracking collar scientists had attached around his neck. The radio collar had long since dropped off, but the name had stuck.