“Muay Thai is the ancient art which has kept the Thai people free.” Explained Pra Kru Ba, the stocky, bald-headed monk, who had once been a famous boxer. He was laying on the bamboo platform in his jungle hut, giving me my daily lesson on life. After months of living in the monastery, my Thai had finally progressed to a point that I could make some sense of what he was saying. 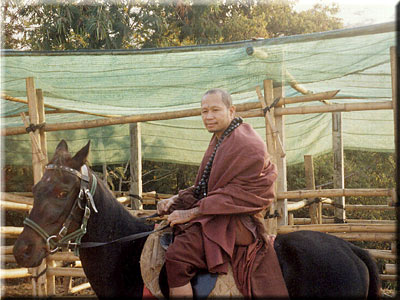 “Muay Thai is a spiritual pursuit.” He said. “The body is pure. The heart is pure. Only the head can create evil. And if evil invades your heart, then you cannot win in a boxing match.” Religious tattoos played across his muscles, as he reached for another handful of food. “You live too much in your head. Evil can come into you faster than it can the others, because of your education.” He told me flatly. “You are a good man. But your anger will destroy you.”

My Italian temper had become a thing of legend in Northern Thailand. Earlier in the day, I had threatened to strangle one of the monks with his own robe.

After the meeting, I knew that Maii, a devoted Buddhist lay-woman, would ask me for a full report on Kru Ba’s diet. He had been ill lately, and unable to keep food down. She would be pleased to hear that he was eating again.

“Even when you are meditating you look sad.” He said with pity. “I hope you will stay with us long enough to overcome these difficulties.”

He was making an allusion to the Shaolin Temple, in China, where I had lived for a number of months. I had gone there hoping that they would be able to make me spiritually healthy. Instead, I got in fights every day, and left there unchanged, except that I had lost weight, and produced a great book, called The Monk from Brooklyn. But I was still as angry as I had ever been. 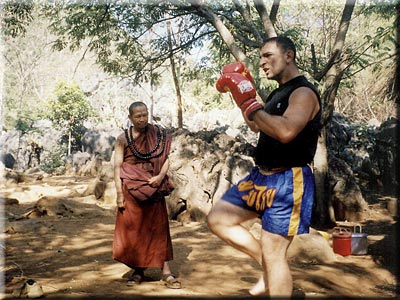 At Kru Ba’s monastery, Wat Achatong, we shared everything. The problem was, we didn’t have all of that much, only the food which the hill-tribe people gave to the monks, in exchange for merit. After a long day of farm work and Muay Thai training, I was famished. I loved hearing Kru Ba’s words. And I cherished our quiet time together. But what I wanted now, was some food. Finally, when I judged that the rate of his consumption had slowed enough that I could ask, a sentence came out of my mouth that I thought I would never utter.

“If you’re finished with those fried cockroaches, could I have them?”

Once again, it dawned on me, just how far I was from Brooklyn.

An Adventure Writer Watches too much TV

It had been nearly two years since the terrorist attacks on the World Trade Center. Tuesday morning, September eleven, I had been in Manhattan. And like all New Yorkers, I had run the gambit of emotions. One minute I felt fear. Another, I felt anger. There were constant flashes of debilitating desperation. For the rest of the world, it had been one horrible day. But for New Yorkers, it had been the beginning of a period of horrible weeks, and eventually months. For me, 911 had served as a wakeup call, a signal that it was time to change my life, and pursue some goal, other than making money.

911 reminded me, once again, that we are all going to die, and that we didn’t know when. My own mortality had haunted me since my earliest childhood. I remember thinking once. “If I died to tomorrow, I would have nothing to show for my eight years of life.” In my prepubescent melancholy I lamented that my name would be lost, across the ages. And so, at age nine, I set out to write my first novel, which I quickly gave up, because there was a Star Trek marathon on TV.

On that Tuesday morning, September eleventh, my childhood angst revisited me. But this time, it seemed somehow more legitimate. “I am thirty three, and if I died tomorrow no one would even know that I had lived.

And so, I gave up my career as an investment banker, and headed to Asia, to become an adventure writer. I spent the first two years writing about Taiwan and China, climbing mountains, crossing deserts, tracing rivers, practicing kung fu, and cycling uncountable miles. People often asked how I got the idea for my various adventures. The answer was, TV. Between Discovery, National Geographic, and Knowledge Channel, there was always someone doing something that looked more interesting than investment banking. And I was motivated to go out and emulate them. I came to understand the TV liability warning, “Don’t try this at home.” 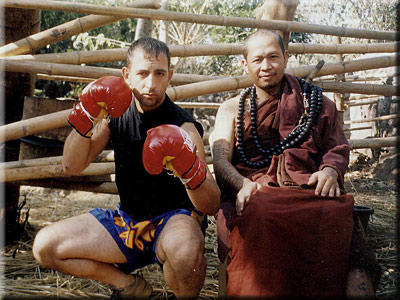 One of the adventures I had heard about was a monastery in Northern Thailand, where Muay Thai was still taught by monks. The first time I heard about this monastery was shortly after my arrival in Taiwan. Although I wasn’t ready to go at that time, I filed it away for another day. On the night that I was packing my things to head to the Shaolin Temple in China, I flipped on the TV, and there was an hour long special about the same monastery. Again, I wasn’t ready to go. I had already purchased my tickets for China. After Shaolin, I returned to Taiwan, and did every adventure I could think of, and wrote a book called Adventures in Formosa. Finally, in November of 2003, I was ready to head to Thailand. My very loose plan was to find the monastery I had seen on TV, and do a series of articles and a book about my experiences there.

When I landed in Chiang Mai, the former capitol of northern Thailand, I had about $200 in my pocket, and the name of a single magazine, who said they might buy one story from me, for a fee of $30. In the end, they didn’t. I couldn’t speak Thai. I had no friends. And all I knew about the location of the monastery was that it was not in Burma.

One of the nice things about being an adventure writer was that you didn’t have to over-plan.

Adventure writing is a lot of fun, but at times it seems like a self-serving, irresponsible way to make a living. One could say that I am helping my readers, by making them laugh. But, will my writing make a difference in anyone’s life? Will my name reverberate across the ages? Will Pra Kru Ba share his deep-fried bugs with me? Only time will tell.