Elephant Polo
The Biggest, Weirdest, Slowest, and Most Expensive Game in Thailand
By Antonio Graceffo

The theory by most have-nots, of which I am one, is that the rich are bored, and that they invent unusual sports to entertain themselves, such as croquet, yachting, and sailing. Cricket is perhaps the greatest example of what happens when you have too much money, and nothing to occupy your free time. A single game could last for three days, and end in a tie score. Any person of normal means would fall asleep in the interim. But the rich fortify themselves with expensive drinks, and conversations related to other sports of the opulent, such as car racing and fox hunting. 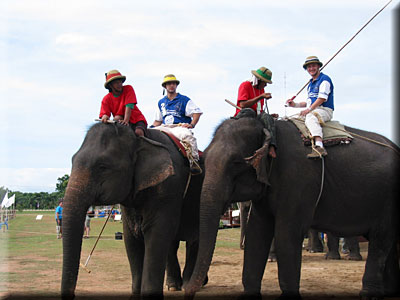 Polo has all of the markings of a rich man’s game. The horses cost hundreds of thousands of dollars. The players must be clad, head-to-toe, in an outfit, which costs as much as most normal people earn in a year, but which can only be worn while playing. You tend to get strange looks if you show up at the food court at your local mall, sporting a leather riding-whip, and wearing a helmet and knee-high jackboots. If not for the skin tight ridding britches, which clearly accentuate if you are circumcised or not, you could be the wayward soldier of some invading army. Instead, you just look like a leather-boy, who got lost on the way to the Pride Parade.

Most people could afford the purchase of a horse and uniform, if they raided their retirement fund, and if they convinced their children to quit school, and go to work in a poorly-lit garment factory in Indonesia. But, the expenses, which keep the sport exclusive only begin there. Next, you have to actually play polo. Since my one bedroom flat is too small for polo, I found that I would have to join a polo club, which costs thousands of dollars per year. Next, since you don’t just want to play in your hometown, you have to join the polo touring circuit. This entails paying entrance fees to the games, and purchasing plane tickets, not only for yourself, but for your steed as well. And finally, the tournaments, tremendous events, played over a period of days, tend not to be sponsored by low-budget guesthouses. Instead, they are hosted by luxury resorts, which cost big money.

My first experience with polo was with the granddaddy of all opulence, elephant polo. And yes, before you ask, elephant polo is played on the back of an elephant. The price tags associated with elephant polo are massive as the elephants themselves. The only thing small about elephant polo is the circuit on which it is played. It includes only three countries, Thailand, Sri Lanka, and Nepal.

This year’s King’s Cup Elephant Polo Tournament, in Huahin, Thailand, was sponsored by the Anantara Hotel and Chivas. Thanks to the sponsors, all of the players, and some lucky members of the press were housed in deluxe accommodations, and kept well plied with Whisky. The teams were heavily represented by Britain and Commonwealth Countries, with the exceptions of the all Thai ladyboy team, the Screwless Tuskers, and the Mercedes, who were all German. 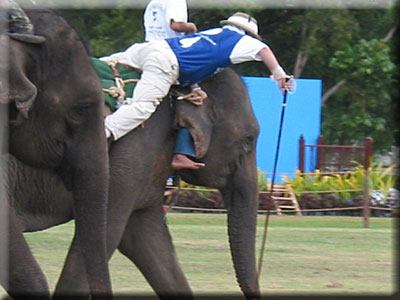 Each team is composed of four members. No more than three members may play at a time, leaving one player in reserve. The game is divided into two chuckas, or halves, each lasting seven minutes, with a fifteen minute break in between. The playing field is similar to a football pitch, with one goal post at either end. Just as in regular polo, the objective is to drive a small ball into the goal of the opponent, scoring one point. To drive the ball, the players use a mallet, which given the size of the elephants, is considerably larger than the one used in horse polo, generally 2.5 meters long.

The elephants are driven by Mahouts, one of Thailand’s ethnic minorities, whose job, for century immemorial, has been to handle elephants. The mahouts were small men, who perched, barefooted, on the neck of the elephant, steering the mighty beast with a combination of secret words and physical gestures. The Mahouts used a metal hook to get the attention of the willful, if lazy, creatures, who apparently were less enthusiastic about elephant polo than the players were. The mahouts also kicked the backs of the elephant’s ears to signal left and right hand turns. Since, I am told, an elephant’s skin is several centimeters thick, one would have to believe that they hear, rather than feel the blows.

Horse polo is one of the fastest and most exciting games in the world. But the fans of elephant polo, once they get over the initial excitement of seeing the elephants, will then be faced with one of the slowest games ever played. Elephants don’t gallop. And, they don’t turn on a time. The players have no control over the beasts. So, much of the skill of horse polo is missing. The one skill that remains quite similar, however, is striking. Elephant polo players must be as adept at swinging a mallet as their horse polo cousins. But, owing to their obscene length, the bamboo handled mallets tend to bend if swung to hard. Bending shortens the mallet and results in the player missing the ball. 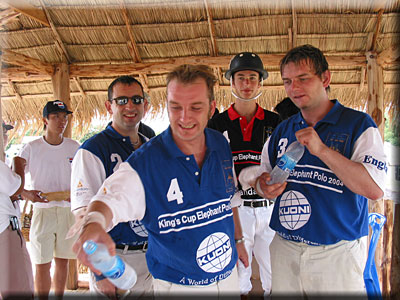 Another problem, unique to elephant polo, is that the ball will often become lost, under the elephants. At those most exciting moments, when all four players press in, close together, all swinging their extra long mallets, risking life and limb for the team, the ball suddenly disappears under one of the mammoth pachyderms. And as an ironic twist of fate, the spectators can all clearly see which elephant the ball is under, whereas the players cannot. As a player you begin hearing cries from all points of the stadium. “It’s on the left!” followed by, “No, my left, not your left.”

Often, even if a player manages to make the most brilliant shot of the day, a swing that would surly take the ball home, it is accidentally blocked by the impassable legs of an elephant, often from that players own team. Sometimes an elephant will step on the ball, burying it, impossibly, in the ground. In this instance, play must be suspended, and a restart called. And of course, any sport which involves elephants will also involve elephant dung. According to the officials at the polo grounds, an elephant consumes 80 kg of food per day. With six team elephants, and one referee elephant on the field, that gives the potential for 560 kg of excrement to be released, at will, by the elephants, often when the players are pressed close together, in a scrum for the ball. Only the rich would require you to wear white pants in a game where there was any chance at all of being shat upon by an elephant.