When you tell the folks back in Brooklyn that you are going to paddle the entire Mekong River, they are justifiably impressed. The Mekong is one of the most famous rivers in the world, often referred to as The Heart of the Dragon, or The Soul of Indochina. It's pristine waterways run from Yunnan, China, through Indochina, ending in Vietnam. 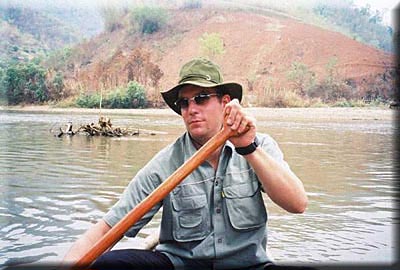 But when you tell people you are going to paddle the entire Maekok River, they just stare and ask "The what river?"

For an adventure writer, whose greatest claims to fame are a solo crossing of the second largest desert in the world, The Taklamakan, (which no one in Brooklyn had heard of), and climbing Taiwan's second highest mountain (San Cha Shan) choosing an obscure river in Northern Thailand, for his first canoe expedition, just seemed the right thing to do.

The Maekok is not even an independent river, in the strictest sense of the word. It is a spur of the Mekong, branching off at the Thai/ Burmese border, on the north west, cutting accross the North of Thailand, and rejoining the Mekong, near the Golden Triangle, at the Lao/Myanmar border.

The first time I set eyes on the Maekok was during a bicycle trip to Burma. Climbing up the brutal hills, leading to the city of Thaton, I ran out of steam, and decided to take my bicycle on a motor boat, to the city of Chiang Rai, which would put me on the direct highway, to Burma. Although I spent much of the trip whimpering on the floor of the boat, nursing my muscle cramps and saddle sores, the beauty of the Maekok River grabbed hold of me. And, I knew I would have to come back, and do the river in a kayak or canoe.

Three months later, I found myself as a member of a small expedition, paddling the Maekok River, from Thaton to Chiang Rai. The beauty of the rivers of Indochina is often indescribable. The solid green walls of the jungle grow right up to the river's edge, where all manner of exotic animals come to drink and fish. A brilliant tropical sun shines down, illuminating the river like a green, neon snake, which twists and winds its way through the fertile landscape. Over head, a clear, bright sky ads a touch of blue to the breathtaking color scheme. 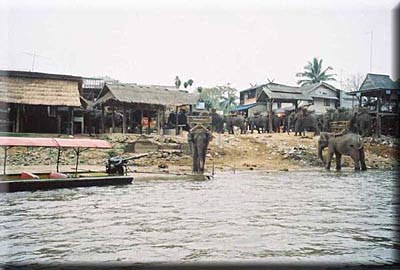 Massive elephants came down to the river to bath, and the good-natured Wadis, elephant divers, waved at us as we made our slow way down the river
My companions on this trip were Reinier and Anouk, two Dutch adventure coaches, who work for Track of The Tiger Tours, and Pouk, a heavily muscled ex-soldier and former professional Muay Thai fighter, who acts as river guide and camp cook. Although Reinier and I both speak Thai, we must rely on Pouk as interpreter, when we meet with the Hill Tribe people, who live in close harmony with nature, along the river.
"Tell me about your days as a fighter." I asked Pouk, as we lazily paddled our canoes.
"I used to like Muay Thai very much." He told me, in his firm voice. "Then I studied Aikido. It is a beautiful art. But now I like scents."
"Scents?" I asked, suspecting he had made an error in his English.
"Yes, you know, fragrances. I like to smell good." He answered.

At every rest stop, Pouk doused himself with generous quantities of various perfumes. After meals, he insisted that we chew gum, which was laced with mouthwash. "It is important for hygiene." he said, sounding more like a den mother than a fighter. There were times I didn't feel like chewing the gum, but the look on Pouk's face said if I refused, I would never chew anything again. I must admit, I had the freshest breath I'd ever had on an adventure trip.
This being my first time in a canoe, I was heavily dependent on guidance from Reinier, who was quite an expert. "I will steer from the rear." Explained Reinier. "You sit in the front, paddle, and look out for rocks."

Unfortunately that was too many steps for a novice like me: sit in the front, paddle and look out for rocks. Inevitably I forgot to do at least one of those things, usually looking for rocks. The result was that we bounced off of the hidden obstacles like the bumpers in a pinball machine. 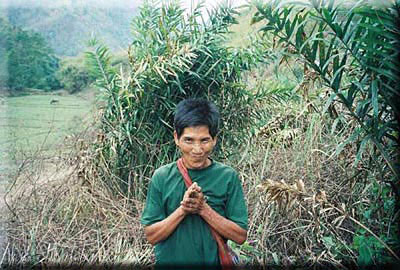 "I told you to watch out for rocks!" Scolded Reinier, as we became beached through my negligence.
"I see them." I countered, in my own defense.
"But you're supposed to see them, BEFORE we hit them." He explained, in a patient tone, normally reserved for a slow-witted three-year-old.
"Ooooh! BEFORE we hit them." I said, Playing along. "Sorry, I had a sequence error."

Adventures are always more exciting, when they have a purpose. The reason for this trip was so that I could write about agro farming projects which were being introduced into the region, in the hopes of ending hunger, and varying the diets of the hill tribe people. Now that Thailand had outlawed logging, the Forestry Department and Royal Projects, were concerned with eliminating slash and burn farming. While we who have so much enjoy the beauty of the jungle, and wish to preserve it as a natural wonder, the hill tribe people need the jungle as a source of food and income. In dealing with the hill tribes one always has to strike some balance between preservation of natural resources, and not leaving human beings in a state of famine.
Fortunately, through the help of visionaries, like Rick Barnet, who introduced agro farming into the region, these modern concepts were now being taught to the Lahu hill tribe. The night before our departure, Reiner took me on a tour of the Maekok River Village Complex, where an agro farming project had been installed, as part of a community development program. The complex also boasts an adventure sports training ground, complete with outdoor rock climbing and other obstacles, used to teach team building and self confidence to young people. Hill tribe children can attend the one year program on a scholarship basis, taking classes in: hotel skills, agro farming, adventure sports, and English.

The complex was tremendous, providing a different sort of vacation for foreigners, while helping as many locals as possible. They were obviously doing good work there. But, the most impressive aspect of the program was that it actually involved hill tribe and rural Thai people. It was refreshing to find a program which wasn't forced on people, but instead, began by identifying a problem, and then included the locals in working towards a solution.

I wasn't thinking about obstacle courses, or agro farming. Reiner would probably have preferred I were thinking about rocks. But instead, I was taking in the beauty of the river, and the life that teamed upon it. Whole families poled their way, in long dugout boats, on their way to market, with their produce. Boys waded in water, up to their necks, throwing fishing nets. Houses, built on sticks, jutted right out over the water. Oxen lazed on the banks. Children swam and played. Tourists, with fat wallets, whizzed by in motor boats, missing it all. And, we in our lazy canoes, became part of the river, and moved in harmony with it.

To find out more about the agro farming project go to: http://www.track-of-the-tiger.com