River Tracing and Team Building in Taiwan
by Antonio Graceffo

This past week started out normally. On Wednesday, two magazines accepted my latest adventure story, but regretted that they couldn't pay me. One magazine even went so far as to ask for a small loan. Thursday, National Geographic ignored me, as usual, and an American newspaper asked me to cover the war in Myanmar for a penny a word. They also asked me not to go over 1,000 words, because they were on a tight budget. So, while I frantically searched around, looking for a cheap plane ticket into a war zone, I got "THE CALL."

"Bonjour Antonio!" Came that familiar voice, which is half speech and half laughter. It was Jean-Marc, the sponsor for many of my Taiwan adventures. The war in Myanmar was just going to have to wait. "Do you have time this weekend?" He asked, not caring if I said yes or no. In his mind, I was going.
"Come to Taipei, we are going river tracing."
River tracing?
"But this one is not so interesting. It is very easy. Next weekend you will come with us again. That one will be very difficult. Also, it will be three days, so bring some extra socks."

Now, he had me booked up for two weekends. What's river tracing? I wanted to ask, but he had already hung up.
Jean-Marc had been hired to lead a group of 20 employees, from a relocation firm, on a teambuilding exercise. On the ride to the mountains, I struck up a conversation with the manager of the company. When I felt that we had built enough rapport, I tentatively asked him. "What is river tracing?"
"I was hoping you would know." He laughed. "You mean, you are paying for this trip, and you don't know what river tracing is?" I asked.
"I told Jean-Marc that we wanted to do something different for our employees." He explained. "I also told Jean-Marc that I wanted the outing to build teamwork. So, he suggested river tracing."

We were each given a life jacket, helmet, kneepads, and rubber boots. This made sense, since, I assumed that a river would be involved. But the next piece of equipment frightened me a little. Why was Jean-Marc asking me to put on a rappelling harness over my swimsuit? The next set of issue was strictly Jean-Marc. We were each given a healthy portion of quiche, a gourmet sandwich, and several glasses of red wine. The best thing, about travelling with Jean-Marc, is that you usually come back alive. And even if you didn't, your last meal would be something really special.
"Don't drink too much wine." Cautioned Jean-Marc.
"Because we will get sick in the boat?" I asked naively.
Jean-Marc laughed. "I like this guy. You are so funny." He said, and walked away.
"I guess there is no boat involved." Said Sean.

There were two Taiwanese guys, who looked to be in great shape, running around, with tons of rappelling gear and ropes dangling off of their bodies. At this point I was certain that apart from Jean-Marc, these were the only two people who had any idea what was going on.
They lead us down to a bridge over the river, and Jean-Marc set up his camera. "OK, Antonio. As soon as you are ready." He said.
"As soon as I am ready for what?" I asked.
"To jump off of the bridge." "Jump off of the bridge? Why would I want to do that?"
"You have to get into the water, don't you? Besides, it will make a nice photo." 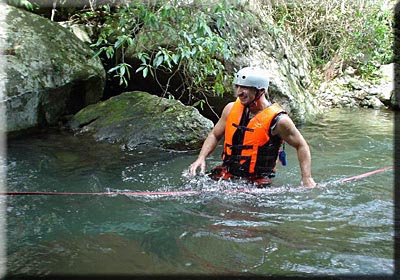 Back in Brooklyn people jump off of bridges after agreeing to testify against certain Italian fraternal organizations in court. A lot of people think Jimmy Hoffa became so depressed that he jumped off a bridge. But jumping off of bridges was never something that we aspired to. "It must be a hundred meters to the water." I protested, seeing the river looking like a small puddle at the bottom of a vast canyon. Apparently this river tracing was just a failed suicide attempt, which was made into a sport.
"Actually," corrected Jean-Marc, "it is less than three meters."

Everyone was watching to see the adventure writer ply his trade. Why couldn't they just come to my house and watch me type? They always focus in on the part of the job that I hate. Taking that first step was a bit counter-intuitive, but like any other controlled fright, it was a rush, and once I hit that ice-cold water, I felt oddly energized. Sean, the only other foreigner, followed right behind me. When we looked back up at the crowd, we saw that they were all turning and walking away. Had this been an elaborate joke? Were they going home?

"We are going to walk along the path." Hollered Jean-Marc, from his lofty perch. "You two just follow the river up stream, and we will rendezvous a bit later.
"Up stream?" I asked. "Wouldn't it make more sense to walk down stream?"
Sean and I began making our slow way, fighting current, and scrambling over the boulders.
"So, I guess this is river tracing." I ventured. "We just walk in the river."
"It would make so much more sense to walk beside the river." Said Sean. "Look at those guys. They are making much better time than us."

The first several hundred meters were a bit surreal, and I actually felt stupid. There was a perfectly good path beside the river, paved, flat, and comfortable. Taiwanese families, out for a stroll, stopped to gawk at the two foreigners, slogging their way upstream.
"Hold up a moment, I think I got some water in my boots." Joked Sean.

As much as I make fun, and try to hate everything, I have to admit that river tracing was one of the most fun things I had ever done in my life. It was such a great workout and adventure to fight against the current, advancing up the river. Climbing over the boulders was challenging, and you really felt a sense of accomplishment, each time you overcame the obstacle. The most impressive piece of personal equipment that we wore was our boots. They could grip anything. You would see a rock, completely covered with slime, and think, there is no way I can stand on that. But as soon as you put your boot on it, you got traction.

Peter had asked that the strongest members hang back, and help the others. Within minutes, and without any real discussion, his people formed a team, and a system, which got every member of the group over every obstacle.
On the larger stones, the two guides would tie a rope between them. One would scale the obstacle, and the other would remain at the bottom, pulling the rope taut. The team members would the use the rope as a direct assist, to climb up and over. If anyone had problems, one of the stronger employees would jump in and help. On the most challenging sections of the trip, we used our rappelling harnesses to clip into the line between the two guides.

"You see that guy." Said Jean-Marc, pointing to one of the Taiwanese employees. "He just became a manager, recently. And, without anyone telling him, he goes ahead on every obstacle, and stays there, helping each team mater, before moving on. Peter is very happy about that. You see this type of activity can be used to see who is a good team player, who will be a good manager, who will give up when things get too rough, and who is just out for himself. They are having fun. But they are also learning, and they are being tested."

In addition to the residual benefits of teambuilding, and exercise, the scenery in river tracing is incredible. You are walking in a river, which is constantly changing. There are small rapids, waterfalls, and green pools. The sides of the river are often rock faces, twenty to thirty feet high. And you are seeing all of this from an angle you wouldn't normally see. People following the path would look down on the rapids from above. But we had the rapids hitting us right in the face. It magnified them, and made them a beautiful force of nature. Being in the river, you felt a part of the whole eco-system. You lived and breathed with the river.
The river is often the only part of the dense forest, where you could see the sky. Luckily, we had a nice, clear day, with a bright blue sky. When you are trekking, you can often get depressed, because of the lack of sunlight. But the river was well lighted, sometimes even glowing, where the sun played along the water's surface. And, when you looked up, you saw a varied landscape of rocks and water, which was ever changing. You didn't get bored watching a river.
The most difficult obstacle was a thirty-five foot waterfall. The team chose to circumvent this obstacle, by rock scrambling up the canyon wall, and re-entering the river, further upstream. I, of course, wanted to try climbing directly in a waterfall. 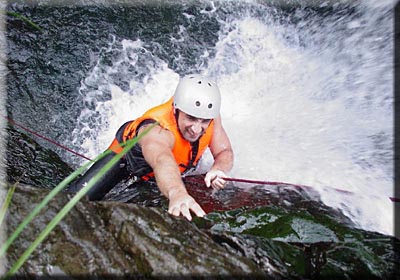 At the beginning of my climb, I used very bad technique, thinking that waterfall scaling differed somehow from rock climbing. But, once I got over the initial shock, that I was climbing against a constant flow of water, I realized that it was no different from any other type of climbing. You simply reached inside the fall, and looked for foot and hand holds. The rubber boots gripped nicely, even with the constant torrent raining down upon me. One modification to normal climbing style, however, was that you couldn't put your hips as close to the wall as you would in normal climbing, because then your head would go under water. One lungful of that frigid water was enough to convince you, that you weren't in Disney Land, and that you needed to be careful. Swallowing water, and going into a coughing fit could have been very dangerous. You could have slipped, and the safety rope could actually have become a hindrance. The other difficulty was that I felt my body going into hyper-thermia. The running water is coldest, and I felt my body slowly shutting down. My muscles tightened up, and I understood why even a good swimmer can drown if he falls through the ice on a frozen lake.

Thirty-five feet was enough. When I got to the top, I was chattering and exhausted. Within minutes, of course I began asking. "I wonder if I could do fifty feet?" I guess I would find out. Next weekend.